A lot of doubts have been placed in true Christianity concerning Jesus & the manner in which he was born.  Critics love to point out to the fact that there are older religions out there that in fact pre-dates the birth of Christ & in which also points out to a figure being born of a virgin, who is part of a triune god.  A lot of ancient religions appear to share this common denominator.

Or (You as a Christian may say), I know there’s something fishy, but I don’t know what it is in order to explain it to the person presenting me this fact.

None believers also like to compare Jesus to Horus, saying that they are one of the same.

The fact is that 4000 years before the birth of Christ, his birth, death, & resurrection was recorded in the Old Testament by the prophet Isaiah. During this time, the promise of a savior being born out of a virgin was well known among the people.  This means that the promise of the coming of Jesus, now pre-dates Horus and any other false religion out there sharing the Christian similarities in their “deities”.

At the tower of Babel, the people took this knowledge in regard the Savior, and put their own spin to it, adding it to their own religions & false gods. This occurred as they went out & began to form nations, after God confused their language.

More religions were born out of the promise that God had given his people in regard the coming of a Savior fulfilled in Jesus.  The pagans adopted the concept & introduced it to their religions, portraying the coming Jesus as Horus, & other false gods. Today, non believers take a look at these false gods, and mistakenly proclaim that the Jesus of the bible is a fraud, because the similarities spoken here can be found within many pagan cultures.  They fail to realize that the reason for these similarities being found on many pagan cultures & religions is the plain fact of what has been already explained here.

Now, speaking of paganism, this lead us to the Roman Catholic Church, an organization in which is not considered to be Christian, but rather pagan with a Christian veneer in order to fool & mislead the masses.

They carry many pagan icons & images no different that the ones created by ancient pagan civilizations. What the Roman Catholic Church has in fact done, is repackage paganism, giving it an air of Christianity. 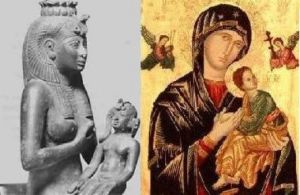 History tells us that immediately after the death of Christ, the Roman Empire was seeking to persecute and kill all of the believers of the Lord Jesus Christ. They were unsuccessful in doing so, because this was creating a stronger credibility among the non-believers; as they saw these Christians willingly give their lives for the sake of  their testimonies about Christ. Because of this, Christians continued to multiply with no end to it. This is a total contrast to Islam in which forces conversion under the threat of beheading.

We know as Christians that Satan is in control of this earth, and therefore uses his people to accomplish his evil deeds and desires; whether it would be through direct satanic pacts, sinful behavior, or plain ignorance. A person, who is not under the blood covenant of Jesus Christ, will fall under Satan’s lies, confusions, and ultimately his control.

Having said that, the Roman Empire, frustrated by their fail efforts to make Christianity disappear, was compelled to seek another method of its destruction. (Any one heard of an old proverb, if you can’t beat them join them?)

The plan was to mislead Christianity into practicing paganism and other practices that are detestable to God, while claiming to be following that same God.  Satan understands that a body can be killed, but the soul of a saved person goes to the Lord God, while the soul of a mislead person joins him in hell.

So what a better way to destroy Christianity by nothing more than misleading them into spiritual destruction?

What if Satan can make you think you are saved, while you are desperately lost?

This is how the Roman Catholic Church was born and the purpose of its existence.  Under a Christian veneer they could now operate their agenda. They cannot only mislead the poor, the meek, the God seeking individuals, but now they can also perpetrate all sorts of atrocities, & wickedness, all in the name of “Christianity”. And who will be hated and blamed for all of this? (You guess it, the true Christians.)
Have you ever wonder why would a Catholic Altar resemble altars used in Santeria, which are Satanic? 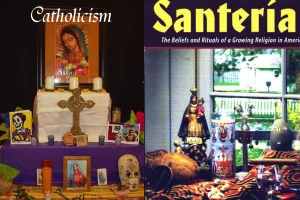 Because birds of the same feather, flock together. The Illuminati is working strongly within the Catholic Church & even within some protestant churches, so our option as Christians is to seek God directly, & hear from him directly through His Holy Word. No Pope or pastor is required for true salvation, because there is salvation outside any church.

Don’t be deceived, Jesus is the Son of God, & his promise existed way before the manifestation of false religious systems claiming the same attributes of Christianity.

Jesus is truly God the Son, the redeemer of mankind to the honor & glory of God the Father.