In the process they become idolaters making a god of their own, saying “my god would never do a thing like that” and thus elevating their understanding of good & evil as superior from the Creator.

The fact is that we either believe the whole bible or deny it entirely. Either we believe the bible is the Word of God, or we don’t.

Atheists alike have resorted to the same key bible references to try to justify that the God of the bible is a “mean, manipulative, psychopathic God”.

Sadly, many Christians do not know how to defend or justify the following bible verses when confronted by atheists and non believers of the the bible.

The purpose of this post is to explain the following key bible verses & arguments that are constantly thrown to a Christian by non-believers & atheist alike.

“God is not moral” Their argument: God hardened Pharaoh’s heart so he won’t let the people go and then punished him & his people by killing their first born & all their cattle. Therefore God is not moral and “I have more morals than God”. (They claim).

My response: Let’s examine what the word “moral” means.  Morals are the standards of behavior; principles of right and wrong given by a higher authority in which human society should go by.

There’s no higher authority than the creator himself. The creator does not follow the orders of any society because # 1 He is not human living in any society, and # 2 because he is the law giver who gives His laws to humanity by putting it in their consciousness.

Concerning God hardening Pharaoh’s heart and killing their first born; God created humanity. Within humanity God has vessels of honor & vessels of dishonor. We as humans create our own stuff for our own purpose & use.

In the same manner God can use his creation as vessels of honor or vessels of dishonor as he pleases. If you built something and decide to modify it, rebuilt it, or simply throw it away; who can then tell you that you don’t have the right to do that with what you’ve created & belongs to you? – Read Romans 9:14-17.

“God is a psychopathic murder”

Their argument: “God is a psychopathic murderer; he ordered the genocide of people”.

My response: God ordered the genocide of non human entities known as the Nephilim which were the offspring of the fallen angels mating with human women.

This unholy union resulted in giants that were cannibalizing humans and were corrupting the DNA of God’s creation.

The first time this happened resulted in God having to destroy the earth along with all DNA corrupted creatures; except Noah and his family.

Only Noah and his family had their genes preserved in order to be able to start with a none corrupted humanity all over again.

The second time around, God ordered his creation to destroy “Satan’s creation”, which were these satanic hybrids which were once again destroying God’s creation.

God needed a hybrid free; none corrupted DNA lineage in order to come to this earth and be born of humanity as The Savior to mankind. This makes God a loving God and not a psychopathic god.

“God is a male chauvinists”

Their argument: “God says in the bible through the apostle Paul that women should be quite in the church and that they are not to usurp men’s authority. What kind of God is that, I believe women and men are equal, therefore I am more just than God”

My response: According to the bible God is not a respecter of person Romans 2:11 KJV.

God is a God of order and a God of purposed. God is not politically correct. Politically correctness is a strategy of Satan through his Illuminati puppets to bring society down and rule over them by putting themselves in place of God.  Having said that, the order of God is Himself, His Son, and Humanity.

God never said that men are superior or better than women. God instructed man to love his wife as Christ loves the church. (Ephesians 5:25 KJV.)

Having said that God created men & women equal in his eyes, but not equal on their roles and in their purpose in life. Take for instance 2 electrical wires that might look identical to you. One is positive and the other one is negative.  Both of the wires have a purpose and if you put the wrong wire in the wrong place, there will be consequences. Today, we are seeing the consequences of men and women exchanging their roles. Are we better off today than we were 30 or 40 years ago because of it?

No, it seems like the more we distance ourselves from biblical principals as time passes the worse society gets. We’re keeping getting worse and worse when we supposed to be “evolving” according to the world.

As for women being silent in churches, the apostle Paul was addressing the Churches of Corinth. The women there were being disruptive and were talking to each other during the services.

Now concerning women being pastors or biblical teachers, the order of God is for men to be pastors and for women to teach other women about the bible.

Jesus represents God, man represents Jesus, and the woman represents   man.  This is why Satan has introduced into the world things like transgenderism, homosexuality, women pastors, homosexual pastors and all kinds of political correctness to destroy God’s picture and the order of things. So whoever wants to accuse God of anything, he or she does not know God and is danger of hell fire. The creation cannot tell the Creator you did this or that wrong. Who are we to judge God?

“Well, my God would never allow anyone to go to hell to be punished for an eternity”. 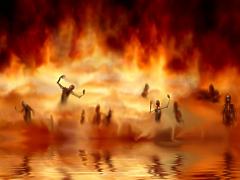 Their argument: If God is all love why would he send people to hell?

My response: God is love, but He is not “all love”. There are other attributes that make out who God is. God is Holy, truth, and also  just besides being love..

If we make a god out of our own imagination that is not the God described in the bible, we are then guilty of idolatry and thus worship a false god.

Having said that, For God so loved the world, that he gave his only begotten Son, that whosoever believeth in him should not perish, but have everlasting life. (John 3:16 KJV)

God doesn’t want anyone to go to hell, but unfortunately there are a lot of people that insist in going there.  Our own sins will condemn us as we stand in the presence of God. This is why we need Jesus to cleanse us from our sins and to be the Lord of our lives.

It was an act of love from God that opened up a way of salvation to mankind through His Son Jesus Christ.

But if we reject Jesus, God will also reject us, for there is no salvation outside Jesus Christ.

“God is not fair”

Their argument: If Jesus is the only way to God, then how can God judge those people who have never heard of him like indigenous tribes in remote locations?

Reference to: Jesus saith unto him, I am the way, the truth, and the life: no man cometh unto the Father, but by me. (John 14:6 KJV)

My response: If a person has never heard of Jesus due to the fact that he or she lives in a remote location as part of an isolated tribe somewhere in this world; God will judge them by the 10 commandments.

The bible says that the law (Which is the 10 commandments) has been written in the hearts of all humans.)

Romans 2: 14-15 KJV – For when the Gentiles, which have not the law, do by nature the things contained in the law, these, having not the law, are a law unto themselves: Which shew the work of the law written in their hearts, their conscience also bearing witness, and their thoughts the mean while accusing or else excusing one another;)

All humans have the capacity to differentiate between right and wrong, and good and evil. If a person never heard of Jesus Christ, he or she will be judged by their deeds. However, I will assure you that this is not the case for most of the population of the world that have heard of Jesus and have blatantly rejected him or have rejected to know about him.  I will also assure you that humanity would be without excuse.

Romans 1:20 KJV- For the invisible things of him from the creation of the world are clearly seen, being understood by the things that are made, even his eternal power and Godhead; so that they are without excuse…

Although I don’t know everything, If you have any other tough bible questions that you would like an answer to, please send me a message and I will do my best to answer your question. I might even add your question along with my response into this post.